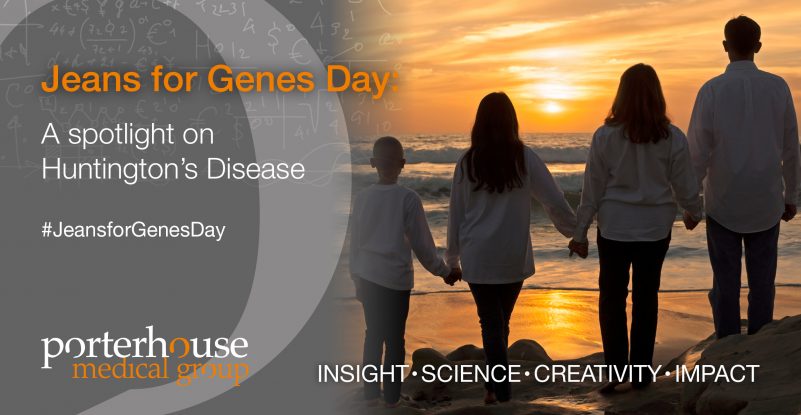 Genetic disorders affect 1 in 25 children, with 30,000 babies and children being diagnosed in the UK each year. 1

There are over 6,000 known genetic disorders, with new disorders being identified daily; in the UK, it is estimated that more than half a million children and adults are living with a genetic disorder.2

One of this year’s recipients is the Huntington’s Disease Association.

Huntington’s disease is a genetic neurodegenerative disorder characterised by the gradual onset of involuntary movements, behavioural changes and memory lapses that get progressively worse over time.3 The disease is an autosomal dominant inherited disorder, meaning that a child has a 50% chance of inheriting the faulty gene, and therefore the disease, from an affected parent. As Huntington’s is a late onset disorder with symptoms developing on average around 40 years of age, it is often passed on before the parent is diagnosed. Unfortunately, life-expectancy is shortened to around 15–20 years after the onset of symptoms.4

The HTT gene (Huntingtin) codes for the huntingtin protein, which has a role in neuron development.5 The HTT gene contains a cytosine-adenine-guanine (CAG) sequence, located on the short arm of chromosome 4, which is repeated about 20 times in individuals without Huntington’s.3,6

Individuals with Huntington’s, however, tend to have more than 40 CAG repeats. Increase in CAG repeats causes accumulation of Huntingtin. Instead of developing neurons, this accumulation damages neurons, causing them to function poorly and reduce in number over time. This occurs in the basal ganglia and cerebral cortex, parts of the brain that are associated with movement. 6 The symptoms of Huntington’s include difficulty concentrating and memory lapses, depression, stumbling, clumsiness, involuntarily jerking, mood swings, personality changes, problems swallowing and difficulty moving.4

In some patients with more than 55 CAG repeats, symptoms tend to occur before the age of 20 years, and the condition is known as Juvenile Huntington’s Disease.3 The first signs, such as learning difficulties and behaviour changes, are usually observed at school.3

Huntington’s disease can be diagnosed by a genetic test. GPs refer those who may be at risk to a genetic counsellor, in order to ensure the risks and benefits of getting tested are explained thoroughly before the test is carried out, given the implications and ethical considerations of a diagnosis. A blood test, called a predictive test, is used to check for the number of CAG repeats in the HTT gene to confirm whether the patient has the disorder.4 A predictive test cannot be carried out until the individual is over 18 years of age.7

What are the treatment options?

Unfortunately, there is no cure for Huntington’s, however there are options to try to manage the symptoms. Medications can be prescribed to treat depression, involuntary movements and mood swings. Other sources of support include occupational therapy, speech and language therapy, and physiotherapy.4

Where the money goes

Funds raised through the Jeans for Genes Day initiative go towards raising awareness of genetic diseases and the support services available. Genetic Disorders UK runs free telephone and email helpline services for all genetic disorders, which is staffed by genetic counsellors.2 This year with the grant provided by Jeans for Genes day, the Huntington’s Disease Association will provide a confidential youth engagement service for children aged from 11–22 years who have been recently diagnosed with, or affected by, Huntington’s disease.8