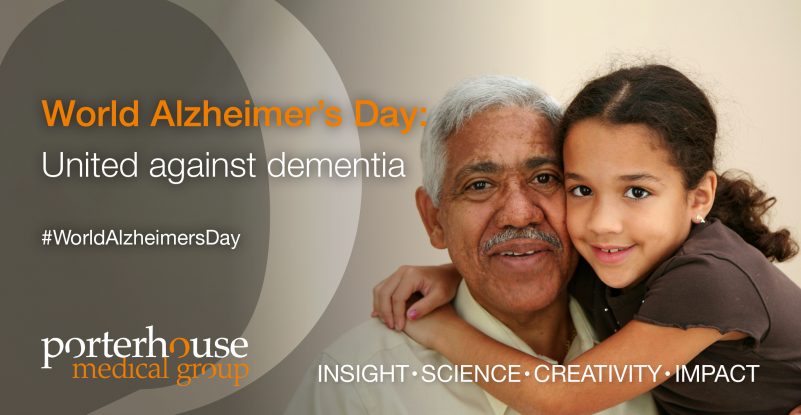 Today, there are estimated to be 850,000 people living with dementia in the UK alone [1]. Despite this, as many as 2 out of every 3 people globally believe that there is little to no understanding of dementia in their countries [2]. World Alzheimer’s Day, which occurs annually on 21 September, aims to combat this lack of comprehension by raising awareness on a global scale of the symptoms of and treatments for dementia, and the daily challenges that patients face.

Dementia is loosely defined as a decline in mental ability that is severe enough to affect daily life [3]. Alzheimer’s disease (AD) is the most common cause of dementia [4]. The brain functions via a tight-knit network of cells called neurons [5]. Neurons are highly specialised to transmit large volumes of information and contain a very specific selection of proteins and chemicals at exact concentrations. It is this exact balance of proteins – notably Beta-amyloid (Aβ) and tau proteins – and chemicals that is disrupted in AD, affecting cognitive function.

In brains that are affected by AD, the Aβ concentration increases as it accumulates extracellularly to form insoluble plaques. As Aβ is neurotoxic (damaging to neurons and synapses), this increase in concentration spatially disrupts neuronal cells and affects the brain. Additionally, tau proteins, which are a major component of microtubules (key structural and transport units of the cell), become over-phosphorylated [6]. This over-phosphorylation causes tau proteins to form neurofibrillary tangles, starving neurones of nutrients and eventually causing them to die.

AD reduces brain function in specific areas of the brain more than others. It begins in an area called the hippocampus, which is responsible for forming new memories. As such, early symptoms can include:

As AD develops, the number of affected regions of the brain increases. Another heavily affected area is the amygdala, which controls emotions, resulting in [7]:

Dementia affects 1 in 16 people over 65, and 1 in 6 people over 80 in the UK [8]. Early diagnosis significantly increases the life expectancy of patients and, as such, anyone who is worried about their cognitive function and/or memory is advised to consult a doctor.

Although there is currently no cure for AD, treatments do exist to delay its onset and reduce the severity and the number of symptoms.

Other treatments involve trying to reduce the behavioural and psychological symptoms of dementia, which occur as the amygdala begins to degenerate, and symptoms such as increased anxiety, depressive emotions and even psychosis can develop. Where possible, drugs such as antidepressants are used to reduce the psychological effects of the disease. [11].

Thanks to charities such as Alzheimer’s Research UK, research into new treatments continues to bring us closer to a cure for this disease. For more information on World Alzheimer’s Day, please visit https://www.alzheimers.org.uk/get-involved/world-alzheimers-day.