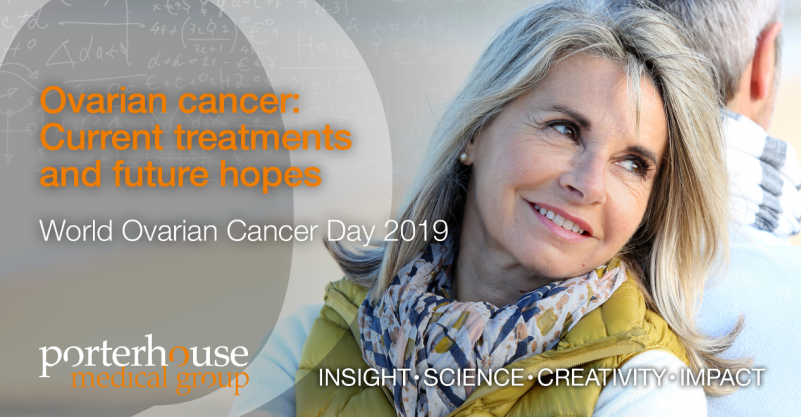 Ovarian cancer is the second most lethal gynaecological cancer and the seventh cause of cancer-related mortality in women worldwide [1]. In the United Kingdom, there were 7,270 new cases of ovarian cancer in 2015 and 4,227 deaths from ovarian cancer in 2016, and approximately 35% of patients are expected to survive for 10 or more years [2].

The symptoms of ovarian cancer are quite similar to those for less serious conditions such as irritable bowel syndrome or pre-menstrual syndrome [3]. Common symptoms include feeling bloated, discomfort in the pelvic area, loss of appetite or feeling full quickly when eating, and urinating more often or more urgently than normal [3]. Other symptoms include persistent indigestion or nausea, a change in bowel habits, back pain, feeling tired all the time and unintentional weight loss [3].

Diagnosis and treatment of ovarian cancer

If diagnosed early, ovarian cancer is highly treatable and curable; however, because a large number of symptoms appear quite ‘normal’ or benign, the condition is typically not diagnosed until it is at an advanced stage [1]. Despite a high initial response rate to treatment, approximately 70% of patients with advanced ovarian cancer at diagnosis will experience recurrence [4]. During periods of relapse, the length of time between chemotherapy treatments is extremely important; experiencing recurrence within 6 months of treatment may mean that the cancer will not respond to subsequent courses of chemotherapy, leaving a patient with very few options [5].

Typically, treatment for a patient with ovarian cancer is as follows [6]:

Current chemotherapy treatment options for ovarian cancer are fairly standard. After debulking surgery, the patient will undergo their first line of chemotherapy; the standard of care involves a combination of paclitaxel and platinum-based chemotherapy, which achieves response rates of over 80% [7]. Unfortunately, recurrence rates in high-grade ovarian cancer mean that platinum resistance is a very real possibility, leaving second-line treatment such as gemcitabine, topotecan or liposomal doxorubicin less effective over time [7].

There are several risk factors associated with the development of ovarian cancer, including those commonly seen with other cancers, such as advancing age, obesity, smoking and use of hormone replacement therapy [7]. There are also risk factors relating to several genes, including breast cancer susceptibility gene 1 and 2, although it is important to note that genetic factors account for only 15%–20% of ovarian cancers; 80%–85% of cases are sporadic. Nevertheless, genetic testing has become more commonplace for individuals with a family history of ovarian cancer [8].

Several options for preventing ovarian cancer are available, although they are not without inherent risks. One preventive measure is use of the oral contraceptive pill, as the increased levels of oestrogen and/or progesterone that result may be protective. Another example is tubal ligation, a surgical procedure that prevents the passage of eggs from the fallopian tubes to the uterus, which reduces the risk of ovarian cancer by up to 33% in patients of average or high genetic risk compared with women who do not undergo this procedure. Other surgical alternatives that may decrease the risks associated with ovarian cancer are bilateral salpingo-oophorectomy (surgical removal of the fallopian tubes and ovaries), and bilateral salpingectomy with ovarian retention (surgical removal of the fallopian tubes while leaving the ovaries intact) [9].

In 2011, the European Medicines Agency (EMA) approved the use of targeted therapies, including an anti-angiogenic treatment alongside chemotherapy to increase the effectiveness of treatment and therefore survival [5]. However, this treatment option places a burden on patients because of the increased toxicity and intensity of therapy versus standard chemotherapy [5]. In 2018, the EMA also approved the use of three novel treatments that inhibit the ability of poly(ADP-ribose) polymerase (PARP) to repair DNA damage effectively, disrupting DNA repair in cancer cells and slowing disease progression [10–12]. The aim of these treatments is to prolong the time between chemotherapy episodes and thus maintain sensitivity to platinum-based chemotherapy, which would maintain the quality of life of patients. Use of PARP inhibitors has had a marked positive impact on the treatment of recurrent ovarian cancer by increasing the time between recurrence, allowing the cancer to be re-treated with platinum-based agents. Further indications and uses for this class of drugs are being investigated, suggesting that a promising future for ovarian cancer patients is on the horizon [13].