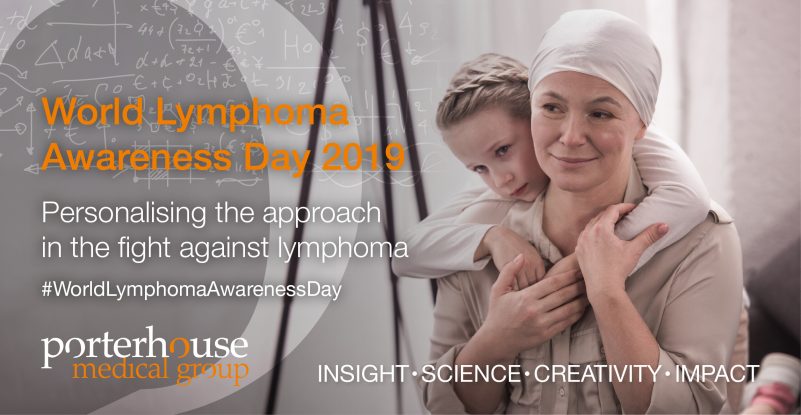 Similar in concept to blood moving through the circulatory system, a fluid known as lymph circulates through the lymphatic system. Along with various other roles, the lymph carries immune cells, known as lymphocytes, out of the lymph nodes and into the blood to fight infection when needed.2

Unlike leukaemia, which can occur in lymphocytes situated in the bone marrow, lymphoma develops when lymphocytes begin to divide uncontrollably in the lymphatic sites where immune cells accumulate, most commonly the lymph nodes.3 There are two major types of lymphoma (both of which can be divided further into subtypes):4

As there are many different types of lymphoma, the symptoms can vary; however, the most common are swollen lymph nodes, fatigue, unexplained weight loss, night sweats and itching.6

Since lymphoma encompasses a variety of cancers, there are multiple therapies used to treat the different types. Hodgkin lymphoma is commonly treated with chemotherapy, followed by radiotherapy in some cases.7 For non-Hodgkin lymphoma, the course of treatment is very much dependent on the subtype, but chemotherapy is still used as first-line therapy in the UK. Monoclonal antibodies and steroids are also used in certain cases of lymphoma.8 With current treatment methods, the 10-year survival rates in the UK for patients with Hodgkin and non-Hodgkin lymphoma are 80% and 63%, respectively; however, depending on the lymphoma subtype, the survival rate can vary considerably. 9,10

Personalising the approach in lymphoma treatment

Although UK survival rates for lymphoma are greater than those of other cancers such as ovarian cancer and myeloma, there is considerable variation in patient responses to current treatments for lymphoma.11,12

For some patients, chemotherapy regimens are highly effective; however, for others, they have minimal impact on cancer progression. In addition, some individuals cope relatively well with their treatment, whereas in other cases, adverse reactions are more extreme and can even be fatal. Even if the patients then go into remission, some relapse and some do not. This vast range of responses to available lymphoma treatments is largely thought to be due to intertumour and intratumour heterogeneity.12 For example, in germinal centre (GC) lymphomas (a subtype of non-Hodgkin lymphoma), 200 recurring genetic mutations that are uncommon to non-cancerous cells have been discovered; however, very few of the same mutations are observed in more than 10% of patients with GC lymphomas.13 This great variation in the genetic profiles of lymphomas may have knock-on effects on patient response rates to certain treatments. The premise of personalised or precision medicine is that if a shift can be made towards treating patients based on the specific profile of their cancer, rather than using generic therapies, treatments will become more targeted and therefore potentially more effective.13 This concept is already being applied, both in a research setting and in the clinic.

One example of a personalised therapy is CAR T cell therapy. As of 2019, two types of CAR-T cell therapy have been recommended by the National Institute for Health and Care Excellence: axicabtagene ciloleucel for the treatment of diffuse large B-cell lymphoma (DLBCL) and primary mediastinal diffuse large B-cell lymphoma  (PMBCL) , and tisagenlecleucel for the treatment of refractory DLBCL . These cancers are all subtypes of non-Hodgkin lymphoma and the licensed CAR T-cell therapies are to be used only in specific circumstances in which previous therapies have failed.14 This ground-breaking treatment involves reprogramming the body’s own lymphocytes, specifically T-cells, to fight the cancerous cells, as summarised in Figure 1.15 Although this therapy does still pose the risk of serious side effects, it has been shown to be effective in individuals whose lymphomas were previously deemed untreatable.15 Since this therapy uses the patient’s own cells, it is a key example of a personalised medicine that has great potential to revolutionise lymphoma treatment in those who are unresponsive to pre-existing therapies.

Treating based on molecular diagnostics

Additionally, approaching lymphoma on a case-by-case basis may soon affect the course of initial treatment. Profiling gene expression in lymphoma is not a common occurrence; however, as understanding of the contributions that genetic and epigenetic modifications make to various lymphoma subtypes grows, gene expression is increasingly likely to inform therapeutic decisions.13 For example, there are two main types of DLBCL – activated B-cell (ABC) and germinal centre B-cell (GCB) – both of which are commonly treated in the same fashion. However, the targeted drug ibrutinib has been shown to be significantly more effective against ABC DLBCL than GCB DLBCL, most likely because it inhibits a protein kinase that is only expressed in the ABC subtype.16

In conclusion, although personalised lymphoma treatment is not yet a reality for many, significant progress is being made in developing therapies that are tailored to individual patients, and as result, such a possibility may not be as far away as first thought.