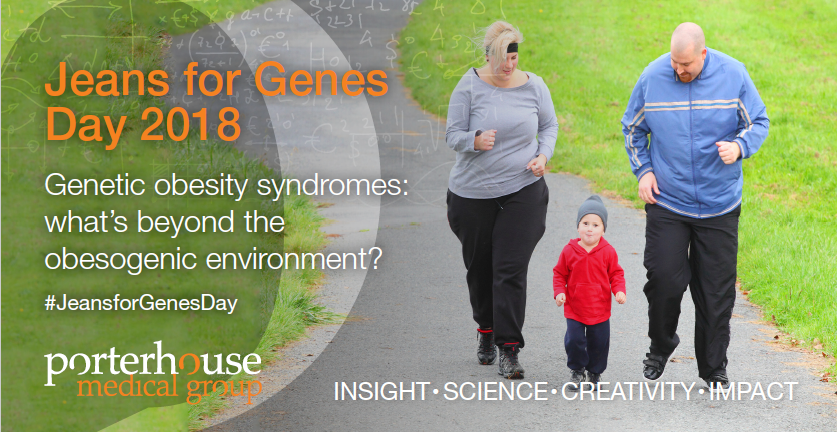 It is widely believed that obesity is caused by eating too much and moving too little. To a certain extent, this is true: we are what we eat. If we consume high-energy foods (particularly containing high levels of sugars and fat) but don’t exercise enough, our bodies will store much of the surplus energy as fat. Indeed, modern society represents an ‘obesogenic’ environment, where excessive calorie intake, combined with a general lack of regular physical activity, is considered the major environmental factor driving the pathogenesis of obesity.

But, what about those people who can’t lose weight, despite having a healthy diet and doing regular exercise? What if there is something else beyond the ‘obesogenic’ environment?

Genetic studies in children have helped us to recognise the pronounced genetic component of this disease [1]. Min et al. have shown that there is a high concordance between the body mass index (BMI) scores of twins, meaning that the way we accumulate fat mass can be inherited [2]. Studies from adopted children further support these observations, demonstrating that the BMI scores of adopted children strongly correlate with the BMI scores of their biological parents and/or siblings, but not with the BMI scores of their adoptive parents [3,4]. Familial studies like these have led to the identification of chromosomal loci associated with rare familial syndromes that are linked to childhood obesity, such as Prader-Willi syndrome, Alström syndrome and Bardet–Biedl syndrome [5–7].

More recently, genome-wide association studies have uncovered nearly 100 different genetic loci potentially implicated in the pathogenesis of obesity in adults. Many of these loci are also mutated/altered in children and adolescents who suffer from obesity [1].

Obesity among children has notably escalated over recent decades and represents a major global health problem. Being overweight during childhood can not only result in the development of serious medical conditions and comorbidities later in life, but also lead to psychosocial disorders. Because little is known about genetic paediatric disorders that cause obesity, young people who are obese are often blamed for their weight gain, with the common perception being that blaming the individual may motivate them to adopt healthier behaviours [8]. Thus, weight discrimination has increased by 66% over the past decade, together with obesity, and its prevalence rates are now comparable to those of racial discrimination in America [9,10].

Tackling childhood obesity and its stigma can not only facilitate prevention and treatment of paediatric cases, but also have fundamental implications for this disease in adults, ultimately bringing benefits to the entire healthcare system.

In 2017, a clinical practice guideline was formulated to help paediatricians to assess, treat and prevent paediatric obesity [11]. Since the publication of the original guideline 8 years previously, an additional 1,778 references concerning paediatric obesity have been added to PubMed. In this context, the genetics section has been extensively revised and updated with the latest genomic findings. Paediatricians therefore have a crucial role in determining how to approach obesity in early life and inform families about the potential underlying genetic disorders that can explain obesity in some circumstances.

Genetic obesity syndromes, like other genetic disorders, affect the lives of many children and adolescents. Today, at Porterhouse, we join the Jeans for Genes Day annual fundraising campaign for Genetic Disorders UK, the national charity that supports individuals and families affected by genetic disorders.

Visit www.jeansforgenesday.org and wear jeans today to help us raise awareness of the 500,000 children in the UK affected by genetic disorders.